Posted in Events,Musicians and Bands

So this week i’m in LA shooting at E3 for CBS Interactive (for slideshow content and press conference live-blogging photo contribution). Once in a while I get sent out to do an expos like this, it’s generally pretty tiring and stressful (though not like wedding stress, a totally different animal.. i never, for example, shed happy tears during the peaks of a press conference!), as it involves walking around looking for and shooting a lot of things off lists for hours navigating a hectic show floor with crowds of people, all of whom are busy oggling things and not looking where they’re going and wandering slowly with bulky backpacks on. This show is no exception. Monday kicked it off with a series of press conferences, all in different locations around LA…  the driving between was the worst.  They are not kidding about traffic here.  It sucks.  The last “presser.” hosted by Sony, was by far the most fun however, as there were food trucks and an open bar when we walked in and waited to be let into the venue, and then as a surprise concert after the press conference… who played? Jane’s Addiction! I got tipped off that it would be them by one of my colleages and sure enough I went down to look at the setlist on stage and it was definitely them.   Now, granted, it’s been a long time since i put on one of their (the two first ones anyway) records, but I was into their music back in the day enough to be pretty psyched to see them perform — I never did when I was young. Being an audience of press and photographers / videographers, the front row was littered with pros weilding cameras. It was a funny thing to be up there, all of us shooting like crazy, and Perry Farrell, obvious maniac that he is, ate up every ounce of the attention. The band played a nice set that included some of my favorites, Three Days, Jane Says, and Mountain Song, Stop, and of course they did play the single that MTV loved to play, Been Caught Stealin’.   Apparently they are putting out a new album so they played a song off that too (it was Meh)… who knew. 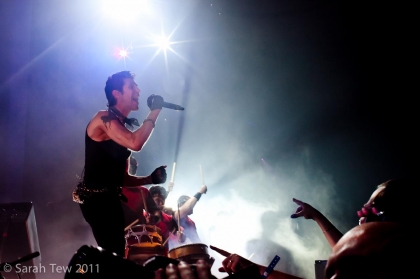 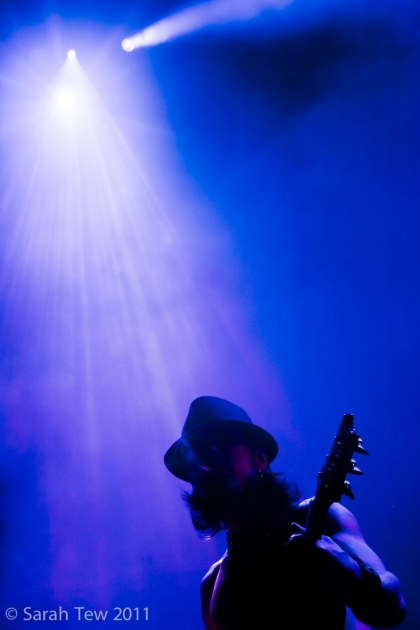 Now, i must tell you that Dave Navarro was pretty fun to watch. He sort of looks photoshopped in a funny way. Like, the guy must be on human growth hormone or something, i mean, isn’t he like almost 50? And yet… he appears to be 25 still some how. Check it out.

Ummm, yeah, they had some pseudo-strippers come out and dance seductively with gags in their mouths during the set.  Unnecessary if you ask me but the crowd loved it.  Target audience?  Male journalists who write about video games for a living 🙂

these are fantastic! what a great surprise!