Fun with Flower Girls at Michael and Natalie's Wedding

Sometimes I think my love of weddings really started when i was (6? 8 years old?) a flower-girl in an uncle’s wedding… It was so exciting and everything about it made me feel special. When I shoot weddings I often get a real kick out of shooting fun pictures of the kids enjoying themselves but rarely have I had a wedding with SO many little girls having so much fun! There were only 4 (!) flower girls at Michael and Natalie’s wedding last weekend but it felt like twice as many, they had so much energy! Anyway, I loved so many shots of them I figured I’d devote a blogpost to a set of just these images. A mini-photoessay of sorts, presented in black and white for continuity. Enjoy! 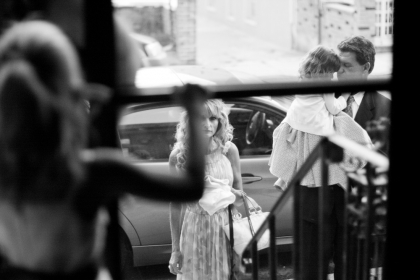 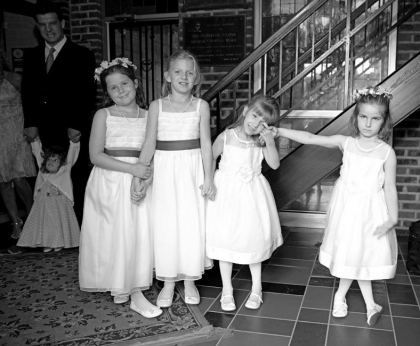 I need to scratch my eye… 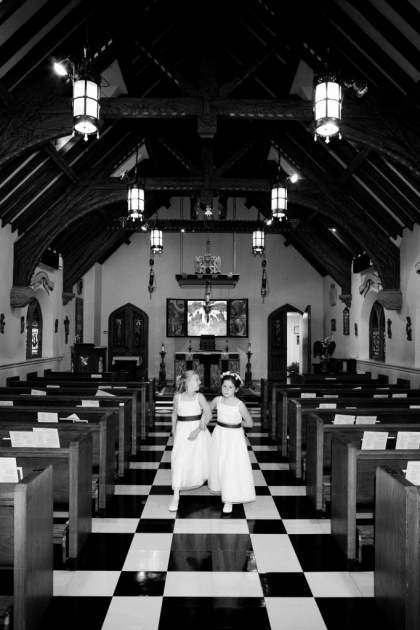 Waiting for the ceremony.

Putting their feet up.

Look at my bubbles!

This one goes out to all the flowergirls out there.

Why is everyone on the terrace?

So last week I was called in to shoot for an annual dinner and celebration for City Year, a non-profit program under the Americorps umbrella that takes kids age 18-24 from all walks of life and pays a small stipend for a year while they are trained and utilized to do community service oriented projects. I knew a kids who did City Year between high school and College and in retrospect I wish I had done something like this program myself- it went a long way in showing him what ‘working in the real world’ can involve and he didn’t take a single thing about college for granted, I’ll tell you that much! But I digress…

The coolest thing about this event was that I was given the special assignment of shooting former President Bill Clinton before and during his speech. In fact, I ate strawberries and cheese in his green room (though note, he never entered said green room!) I chatted with Secret Service Agents! They were pretty icy actually, but I tried… he ended up being late to arrive and I never did get a chance to actually ‘meet’ him, like I had hoped… though he did say to me “Did you get it?” (yes) after my one and only posed shot of him standing with Jill Iscol, the evening’s honoree. Anyway, here are my favorite shots from the job. I really like the black and whites of Clinton standing ready backstage gathering his thoughts… he spoke extemporaneously (no notes!) for 45 minutes and the room was absolutely rapt in silence except for the odd click of my shutter. Also of note, Jack Lew, current Deputy Secretary of State also spoke…

Clinton Arrived… I start shooting from a bit of a distance with my long lens… nervous as can be, secret service agents glaring at me… and finally my big moment: the requested group shot.

We walked into Pier 60 via the terrace walkway and I got a few shots of Clinton before he was introduced for his talk. Long lens, from about 150 feet away maybe.

He was only scheduled to speak for 15 minutes, but of course he got to talking!

Jack Lew, above. Jill Iscol, below.

Visit me during Open Studios this Weekend!

My studio building, (which is home to many painters and sculptors as well as a few other photographers) will be participating in an Open Studios weekend during May 30-31st, put together by the Long Island City Artists, of which I am a member. The public is invited to freely tour the buildings and enter many of the artists studios on Saturday and Sunday from 1-6pm. I will be there with my doors open and new work up on the walls!

It’s a lot of fun and you will definately be inspired by what you see. If you’ve never toured an open studios area before I highly recommend it! It’s really interesting to see the wildly different types of work being produced by NYC artists and most people are very happy to chat with you about what they are doing, how they do it, and what it means to them… Many of us will have work for sale– at NON-gallery prices of course, cut out the middleman, that’s what I say.

If you’re in the neighborhood you should know there is a deal for 5$ Margaritas and Mojito’s (and 10$ Pitchers of Sangria–now that’s a bargain) at La Vuelta Bistro, in building #7 on the map of the open studios…or 10-43 44th Drive. If you catch me at the end of Saturday Keith and I’ll probably be heading there myself at about 6:15pm! For Directions to my studio click up on the tab at left, or go to Hopstop and type in my address to get the simplest directions (including a map of how to WALK from the subway stops– so useful!): I’m at 43-01 22nd Street (Between 44th AVE and 43rd AVE– take note that they are Aves and not Roads or Streets or Drives, trust me…it can be confusing.)

Posted in Engagement Portraits,Weddings
Here is a slideshow for Maura and Basha…  I think this track really complements the good vibes and laughter these two had in the portrait session.
[clearspring_widget title=”Animoto.com” wid=”4805fc0db4a3562c” pid=”4a1366b46f47d765″ width=”432″ height=”240″ domain=”widgets.clearspring.com”]
Posted in Engagement Portraits,Weddings

Posted in Engagement Portraits,Weddings
Here is a slideshow for Maura and Basha…  I think this track really complements the good vibes and laughter these two had in the portrait session.
[clearspring_widget title=”Animoto.com” wid=”4805fc0db4a3562c” pid=”4a1366b46f47d765″ width=”432″ height=”240″ domain=”widgets.clearspring.com”]
Posted in Engagement Portraits,Weddings